Stephen G. Roman, Chairman, President and CEO commented, “The year 2020 was a pivotal year for both of Global Atomic’s businesses and, at the corporate level, we added to our cash position and strengthened the management team and the Board.

The Dasa Uranium Project was redefined with the publication of the Preiminary Economic Assessment in May that used a Base Case US$35/lb uranium price to delineate an initial Phase 1, to mine an average of 4.4 Mlb U3O8 per year, over 12 years, for an after tax IRR of 26.6%.   In December, Dasa was granted its Mining Permit, a major milestone achieved, and our Pilot Plant successfully surpassed our expectations for the metallurgical process defined in the PEA, the results of which were subsequently announced in Q1 2021.

At our Turkish Zinc JV, 2020 marked the first full year running the modernised and expanded EAFD recycling plant.  While EAFD supply restrictions and lower zinc prices affected this business in the first half of the year, both supply and price recovered well in the second half.  We have seen these stronger conditions continue into 2021, which we expect will be sufficient to retire the debt associated with the expansion before year end.”

Looking forward, Mr. Roman commented, “With our permits in hand and positive confirmation of the proposed metallurgical process, we are focused on financing the construction of the Dasa Mine.  To facilitate financing we are on track to complete our Feasibility Study in Q3 and have begun discussions with financial institutions and utilities regarding off-take agreements for our planned yellowcake production.   We remain confident in our plans to start building the Mine in early 2022.

The current Dasa mineral resource will extend well past the initial 12 years of Phase 1. Our previous drilling programs defined a large deposit which will be upgraded with additional drilling. In addition, the deposit remains open along strike and at depth which provides excellent exploration upside.” 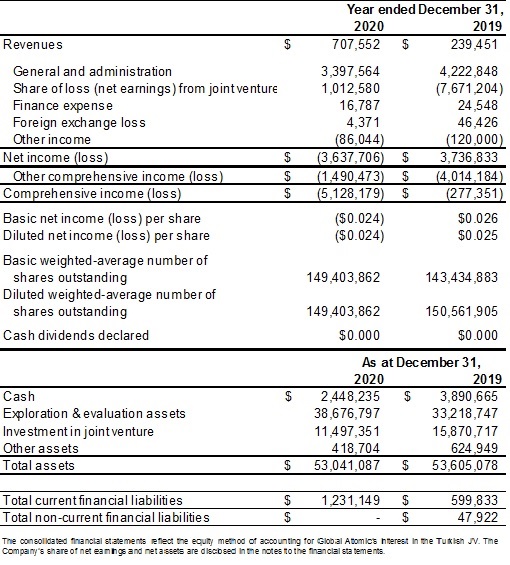 The May 2020 PEA results were prepared based on a U3O8 price of US $35/pound resulting in a Phase 1 Development Plan after-tax internal rate of return of 26.6% and net present value of US $211 million using an 8% discount rate. The average cash cost over this project phase is US $16.72/pound and the AISC is US $18.39/pound. The positive outcome of the PEA supported the Company’s decision to move the Dasa project into production.

In September 2020, the Company, through its wholly-owned subsidiary, Global Atomic Fuels Corporation (“GAFC”), applied for a Mining Permit for the Dasa Project, which was subsequently awarded on December 23, 2020. The Company also completed its Environmental Impact Statement, and, on January 28, 2021 received its Environmental Certificate of Compliance. GAFC now holds all permits required to construct and mine the Dasa deposit.

Upon completion of the PEA, the Company undertook various optimization and trade-off studies to support its final Feasibility Study, including:

The final Feasibility Study for the Dasa deposit is presently underway and is expected to be complete in Q3 2021. The Company is investigating various financing strategies that will enable it to begin construction of the mine and processing facility in 2022, with completion by the end of 2024.

On January 21, 2021, GAFC was awarded a further extension on all 6 Exploration Permits through to December 17, 2023.  The Company intends to further explore and delineate the Isakanan, Tin Negouran and Dajy deposits situated on these permit areas, which may be developed to feed the Dasa processing facility in the future.  All six Exploration Permit areas lie within the Tim Mersoï Basin which has produced uranium for the Republic of Niger for the past 50 years. 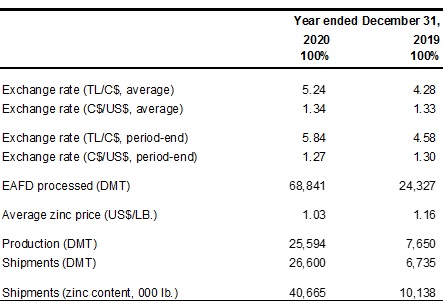 The Turkish JV owns and operates an EAFD recycling plant in Iskenderun, Turkey. The plant processes EAFD containing up to 30% zinc that is obtained from electric arc steel mills and produces a concentrate grading approximately 70% zinc that is sold to zinc smelters in Europe. 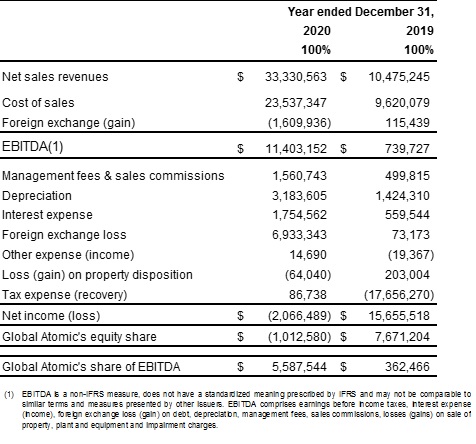 The 2019 operations of the Iskenderun plant are not comparable since the plant was closed for reconstruction between January and September. In 2020, BST processed 68,841 tonnes EAFD, which represents approximately 63% of plant capacity. BST shipped 26,600 tonnes of concentrates in 2020, containing 40.7 million pounds of zinc. At various times in 2020, the plant was shutdown for scheduled maintenance as well as completion of final adjustments to the new plant. By year end, the plant was operating at the efficiency levels that had been planned prior to the reconstruction and has continued to do so in 2021.

The average zinc price in 2020 was US $1.03/lb, down from US $1.16/lb in 2019. The zinc price was US $1.04/lb at the start of 2020 and with improved market sentiment, the zinc prices reached a peak of US $1.12/lb on January 22nd. Thereafter, reduced market demand initially from China and then globally, resulting from the COVID-19 outbreak, resulted in price declines, reaching a low of US $0.80/lb on March 25th. The zinc price remained under pressure in Q2 2020, and strengthened considerably in Q3 as well as through year-end to finish the year at US $1.24/lb.

The total cost for the plant modernization and expansion was approximately US $26.6 million, which was funded by cash on hand, available credit lines from the Turkish JV’s Turkish bank and non-recourse loans from Befesa. At December 31, 2020, the Befesa loans totalled US $13.6 million and bear interest at Libor + 4.0% with no fixed maturity date. The Turkish bank loans were renewed in August and September and converted to revolving lines of credit. The outstanding balance on December 31, 2020 was US $8.15 million and bears interest at 3.05%.

The loans are denominated in US dollars but converted to Turkish Lira for functional currency accounting purposes. For presentation purposes, the equity interests are then converted to Canadian dollars. The foreign exchange loss for the 12 months ended December 31, 2020 related to the Turkish JV debt and cash balances was $6.9 million.

This foreign exchange loss is an unrealized loss, and largely relates to the devaluation of the Turkish Lira relative to the US dollar from 5.95 on December 31, 2019 to 7.43 at December 31, 2020. In economic terms, all revenues are received in US dollars and these will be used to pay down the US denominated debt, so no exchange gains/losses will be realized in US dollar terms. The accounting exchange losses relate to the debt are shown below EBITDA as a financing related cost.

Tax expense (income) shown in the income statement is a non-cash deferred tax amount. The 2019 tax recovery arises largely due to the recognition of investment tax credits. Turkish entities qualified for an investment tax credit incentive on the new plant, of which TL 77.4 million ($13.3 million) remains as a carry-forward balance at the end of 2020.

QP Statement
The scientific and technical disclosures in this news release have been reviewed and approved by Ronald S. Halas, P.Eng. and George A. Flach, P.Geo. who are “qualified persons” under National Instrument 43-101 – Standards of Disclosure for Mineral Properties.

The Company’s Uranium Division includes four deposits with the flagship project being the large, high-grade Dasa Project, discovered in 2010 by Global Atomic geologists through grassroots field exploration. With the issuance of the Dasa Mining Permit and an Environmental Compliance Certificate by the Republic of Niger, the Dasa Project is fully permitted and final design in support of the Company’s Feasibility Study is on-going.

Global Atomics’ Base Metals Division holds a 49% interest in the Befesa Silvermet Turkey, S.L. (“BST”) Joint Venture, which operates a new, state of the art zinc production plant, located in Iskenderun, Turkey. The plant recovers zinc from Electric Arc Furnace Dust (“EAFD”) to produce a high-grade zinc oxide concentrate which is sold to zinc smelters around the world. The Company’s joint venture partner, Befesa Zinc S.A.U. (“Befesa”) listed on the Frankfurt exchange under ‘BFSA’, holds a 51% interest in and is the operator of the BST Joint Venture. Befesa is a market leader in EAFD recycling, with approximately 50% of the European EAFD market and facilities located throughout Europe and Asia.

The Toronto Stock Exchange has not reviewed and does not accept responsibility for the adequacy and accuracy of this news release.